What is an eMTB

Components of an eMTB

How to Operate an eMTB

What is the battery range of an eMTB

How fast does an eMTB go

Where can I ride an eMTB

Am I cheating riding an eMTB

How will I transport my eMTB

What kind of eMTB is right for me

Why buy an eMTB from ERIK’S

eMTBs make riding on the trails even more fun. It’s still mountain biking in the traditional sense – but you can ride further. Folks find themselves able to tackle singletrack that wasn’t possible before or just mountain bike in a completely different way, for longer and with more zeal.

If you’re a mountain biker ready to blaze the trails in a whole new way - this guide will walk you through everything you need to know to buy your new eMTB with confidence. What is an eMTB?

When some people hear of an eMTB an image of a motocross dirt bike comes to mind. Motocross bikes are motorcycles designed to race off-road. eMTBs are also designed to ride off-road, but unlike a motocross bike where the engine fuels forward motion — eMTBs require pedal power to generate movement, just like a regular bicycle.

But in addition to one’s own pedal power, what makes eMTBs so much fun to ride, is that they also have a battery and small motor that provides varying levels of assist to make one’s pedaling easier and/or more robust.

This makes an eMTB the perfect choice for the motocross or motorcycle rider who is looking for a fun yet challenging workout to stay in shape for those physically demanding track sessions. eMTBs are also a great alternative to a gas-powered pit bike for getting around the track!

For many people this means they are able to extend their riding options and explore trails previously out of reach. They can ride further, tackle steep hills that once daunted them, or even ride their favorite singletrack more than once and thus have WAY MORE FUN! Components of an eMTB

Let’s review the main components that all eMTBs feature that are not found on conventional mountain bikes.

Motor: A small compact electric motor that provides a boost when you are pedaling

Battery: The motor runs on a rechargeable battery (many eMTBs also come with Range Extender Batteries for even more power to ride more trails!)

Controller: Usually found on the handlebar, it allows you to adjust the amount of assistance the motor gives you, see how much battery power is remaining, and how fast you are going

Apps: Some eMTB models can be connected to apps that help the rider fine tune their bike to fit their individual needs. How to Operate an eMTB?

Electric Mountain Bikes are simple to operate, even for the technology challenged. There are four basic steps to riding them:

Turn On: eMTBs have a button on the controller that you simply press to turn it on

Pedal: Once the bike is turned on, hop on and ride. The motor will gently kick-in once you start pedaling

Turn Off: Most eMTBs automatically turn off after a period of inactivity, but they can also be turned off by the same button you pressed to turn it on

Recharging: eMTBs runs on a rechargeable battery. Recharge it by plugging it into a nearby outlet. You can do this while it’s still mounted on the bike, or you can remove the battery to bring it to your desk or in the house with ease

What is the battery range of an eMTB?

Different eMTB models will have varied battery ranges that can support up to five hours of assisted riding from the internal battery.

Luckily the handlebar controller relays how much battery juice you have left while riding. If you want more sophistication — some eMTB controllers can be paired with smartphone cycling apps that make it possible to enter your route length before you head out and receive input while riding to ensure you make it back with plenty of battery to spare!

For more control over your range while riding, some eMTBs allow you to utilize a Range Extender Battery so you can ride as long as your body desires.

Go further with SL Technology
An amazing innovation from Specialized is their line of SL eBikes. These models add a lightweight spin on the concept of eBikes by reducing the weight of their bikes and, in turn, increasing the range!

While previous eBikes can be looked at as “You times 4”, think of the SL models as “You Times 2.” They still get you up to the same assisted speeds as the non-SL versions but they do it with less torque or “oomph.” The result is less drain to the battery system which in turn increases the bike’s range.

SL models also feature a range-extending battery option that increases the range by 50%.

Specialized offers an eMTB in the Turbo Levo SL which sits right beside the road version, the Creo SL, and the commuting machine, the Vado SL. How Fast Does an eMTB Go?

Most eMTBs offer a top assisted speed of 20 miles per hour. This can make going uphill a breeze. Imagine sustaining this pace as you climb up the most daunting of hills next time you’re out on the trail. This is what gives riders that “superhero” feeling — especially as they reach the peak of a mountain with plenty of energy to spare.

Where Can I Ride an eMTB ?

Where eMTBs can be ridden is determined at the local level and is changing often as electric bikes become more widely used.

People for Bikes is a great online cycling resource that we use and recommend to stay abreast all the latest developments around eMTBs. Go here to find city guides, destination rides, and advocacy information. Am I Cheating Riding an eMTB?

Customers often ask us if they will still get exercise riding an eMTB. The answer — a resounding yes!

eMTB riders still want a great workout from their ride. On an eMTB they get that plus a whole lotta fun! Check out this pilot study by the US National Library of Medicine, National Institute of Health that concluded that riding an eMTB is “moderate to vigorous physical activity”.

This is good news for those that feel out of shape as an eMTB can give them the extra boost they need to get back out there so they can begin to cultivate new levels of physical fitness and endurance.

Plus, eMTBs make it possible for folks to ride again as a way to rehab their body after an injury. This inspiring story highlights how Jeremy Jones, pro snowboarder and founder of Jones Snowboards, used the Specialized Turbo Levo eMTB to heal his body after being seriously injured by an avalanche.

Are you getting excited about how an electric mountain bike may change your relationship with cycling? Keep reading to learn about the different eMTBs available today and how to find the one that’s right for you.

How Will I Transport My eMTB?

While eMTB designs are evolving to become sleeker and lighter — most are still a bit heavier and bulkier than your conventional mountain bike. Thus, they may not fit in the trunk or backseat of your car as easily. In this case, you’ll need to purchase a bike rack to transport your eMTB to and from your favorite trails.

When shopping for car racks you’ll first need to know how much your eMTB weighs. Then you can refine your search for racks that are rated to carry that amount of weight. Additionally, if you frequently ride with friends and transport their bike too – take that into consideration for the total amount of weight you need a rack to carry.

Click here for the car racks that we carry that could work for your eMTB. If you have any questions, contact us or swing by a store. We’d be happy to help you out!

What Kind of eMTB is Right for Me?

One of the primary questions you need to ask yourself before you begin shopping for an eMTB is “how and where do you want to ride it?”

Just like acoustic mountain bikes, eMTBs come in a variety of styles to accommodate many riding interests. Whether you’re a trail rider, a cross country racer, or an endure junkie, there’s an eMTB model that’s right for you! You can learn more about the different kinds of mountain bikes here.

Once you know how you intend to ride, you can hone your online search here. Select the type of eMTB you’re interested in riding in the left sidebar. Our customer service team is always available to answer any questions you have or stop into your local ERIK’S to check-out models on the sales floor, ask questions, and take one out on a test-ride to experience the turbo boost. Why Buy an eMTB from ERIK’S?

Quality Brands From a Name You Trust: At ERIK’S, we offer a huge selection of eMTBs by the most trusted brands in the industry including Specialized, and Santa Cruz. ERIK’S is the Midwest eBike expert. We only sell quality electric bikes that we know, ride and service.

Professional Assembly & Service: All electric bikes that we sell at ERIK’S are built by professional assemblers following ERIK’S strict quality standards. After assembly, every eBike gets quality checked to ERIK’S 100 point standard. This double check ensures your electric bike is built right!

ERIK’S Parts Warranty: Once you purchase your eBike from ERIK’S, you can be confident we stand behind our bikes. Our ERIK’S Parts Warranty extends the manufacturer’s warranty on non-electric components on new bikes purchased from ERIK’S. This covers defects of any non-electric related components for as long as you own your new bike. If your eBike has issues, we will service your bike or work with the manufacturer to fix the problem.

In-Store & On-Street Test Rides: Swing by your local ERIK’S to check out our huge selection of electric bikes. We offer in-store test rides to get you familiar with the eBike controls and pedal assist motor before riding on the road. And of course, our test rides are free whether you are riding in-store or on-street.

ERIK’S Electric Bike History: ERIK’S started selling electric bikes over 20 years ago with the EVG Electric Bike by EV Global (Lee Iococca). We’ve learned a lot over the years and have continue to be big fans of the ever evolving eBike!

ERIK’S has one of the largest selections of eMTBs in the Midwest. Check out our selection online here, or swing by your local ERIK'S to learn more and take a test ride!

View our general Bike Buying Guide to review the other kinds of bikes we sell. Or, go here to see our complete list of Buying Guides. Learn what you need to know when purchasing a helmet, bike shoes, a car rack, and more! 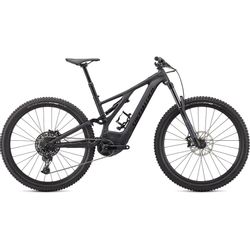 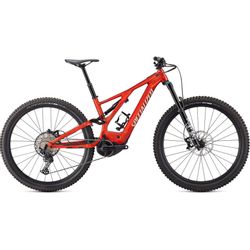 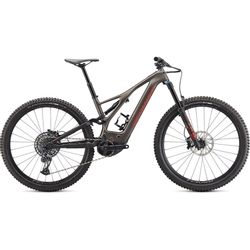 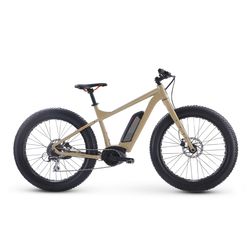