What Makes Up a Ski Setup?

What size skis to I need?

What Types of Skis Are There?

What are System Skis and Flat Skis?

Downhill skiing is a great way to get out and enjoy the snow every Winter, having the proper alpine ski set up is key to the enjoyment. Whether you like to cruise groomed runs, hit features in the park, or seek out fresh powder on the mountains, there’s a ski setup that’s right for you. In this guide, we’ll explain the different parts of a ski setup and how to select the right downhill skis and gear for you.

What Makes Up a Ski Setup?

Four main parts make up a ski system: the skis, bindings, boots, and the poles.
Let’s start by learning more about downhill skis.

Now let's learn about what connects you to the skis, the bindings.

Now let's talk about the direct connection you have to the system, the boots.

What size skis to I need?

There are a lot of factors that go into determining the best size downhill skis, AKA alpine skis, for an individual. Check out our Ski Sizing Guide for more information on this.

What Types of Downhill Skis Are There?

All-mountain skis, just as their name suggests, are designed to perform anywhere on the hill and in all snow conditions. They can handle icy, man-made snow or fresh deep powder, mellow groomed runs or steep, ungroomed mountain runs.

Because of their versatility, all-mountain skis are an excellent option for skiers of all types. If you’re a newer downhill skier and unsure what’s right for you, an all-mountain ski is a great option. And if you’re an experienced skier that wants one ski that will hold an edge at higher speeds on groomed runs and hard snow or let you dip into the powder from time to time, these are the skis for you.

All-mountain skis come in a variety of widths, shapes, and stiffnesses, so there are options to tailor your ski selection towards the type of downhill skiing you want to do. 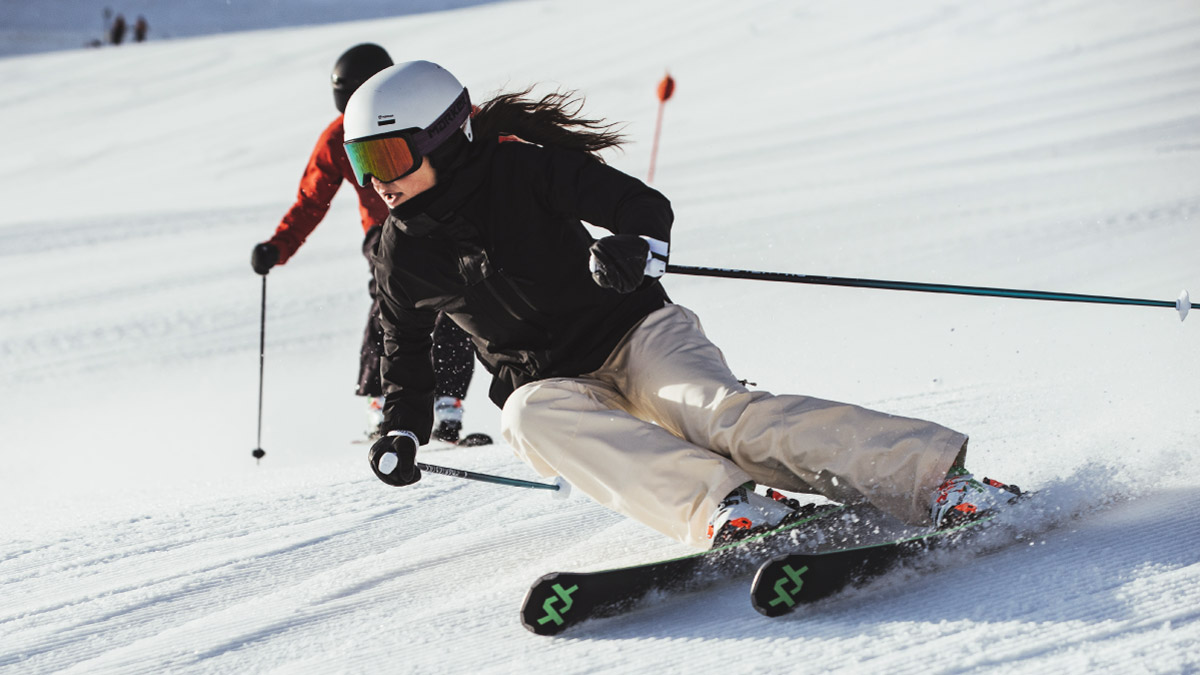 Freeride skis are for the skier that wants to spend time off of the groomed runs, or off-piste, whether it’s hitting fresh powder, riding steep terrain, or hitting big drops and jumps. These skis are typically wider than an all-mountain ski to allow them to float better in powder, but come in a variety of styles to suit you. Freestyle skis, also called park and pipe skis, are designed for the skier that wants to spend the majority of their time in the terrain park. If you spend your time hitting jumps, rails, or the pipe, these are the skis for you. These downhill skis usually are twin-tips, meaning that they can be skied forwards or backward. 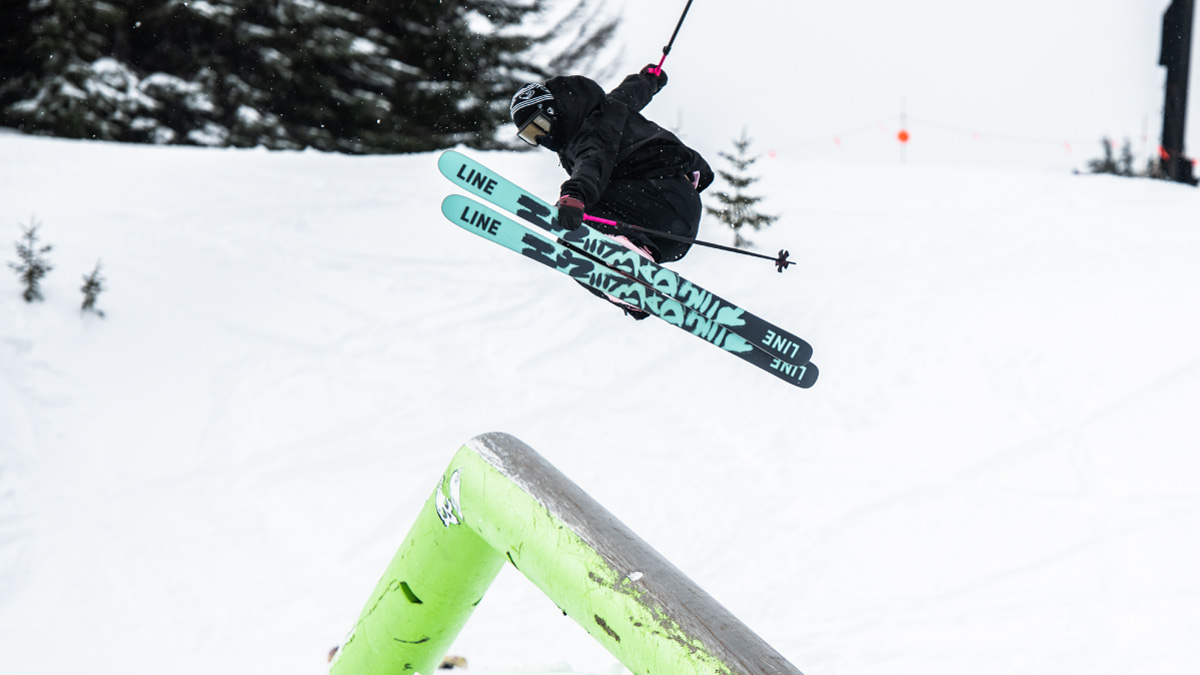 Within the different styles of skis, you’ll also find men’s and women’s options. So what makes a women’s ski different? It’s not just a matter of making the skis shorter. Women are typically lighter than men of equal height, so a men’s ski may be too stiff for a woman to turn efficiently. Women’s downhill skis will have a softer flex to allow the ski to turn correctly and perform at their best. That said, women can certainly select a men’s ski and vice versa depending on the skiers wants and needs. 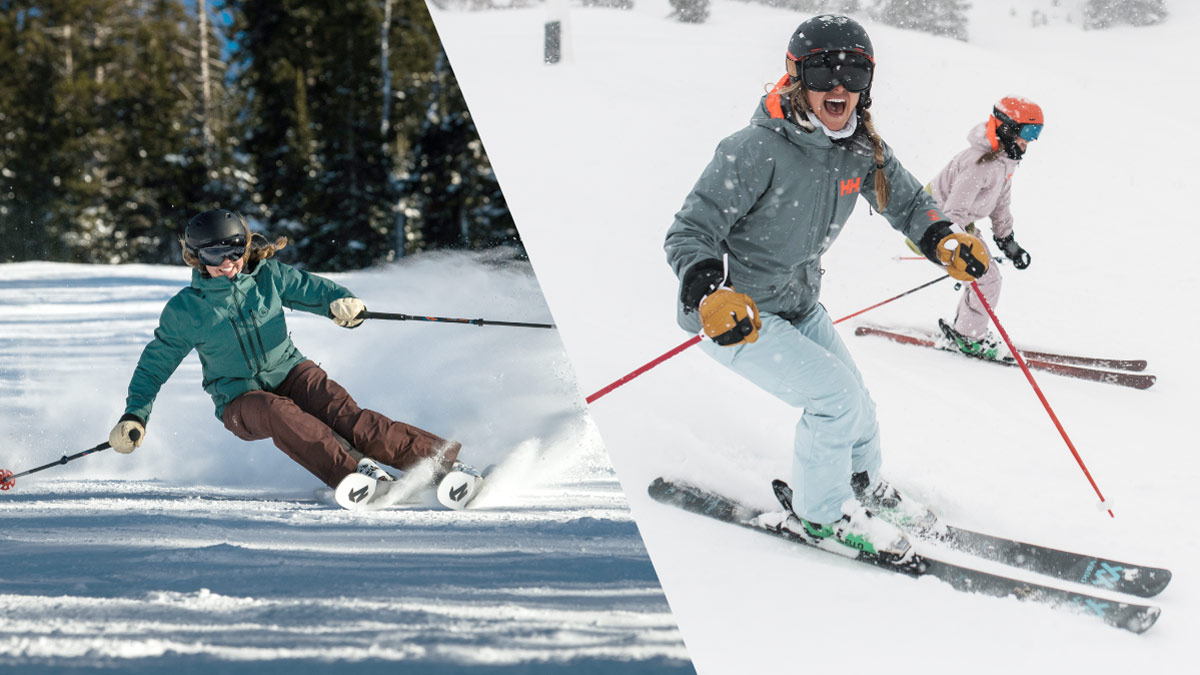 The most important thing to consider when buying a ski setup for your child is getting the right size. While it might be tempting to buy downhill skis that they can grow into, skis that are too big will be hard for them to turn and control, while properly sized skis will be easier for them turn and ultimately enjoy and learn on.

One great option that ERIK’S offers if you’re concerned about buying a ski setup for your growing child is our ERIK’S Kid’s Downhill Ski Lease Program. 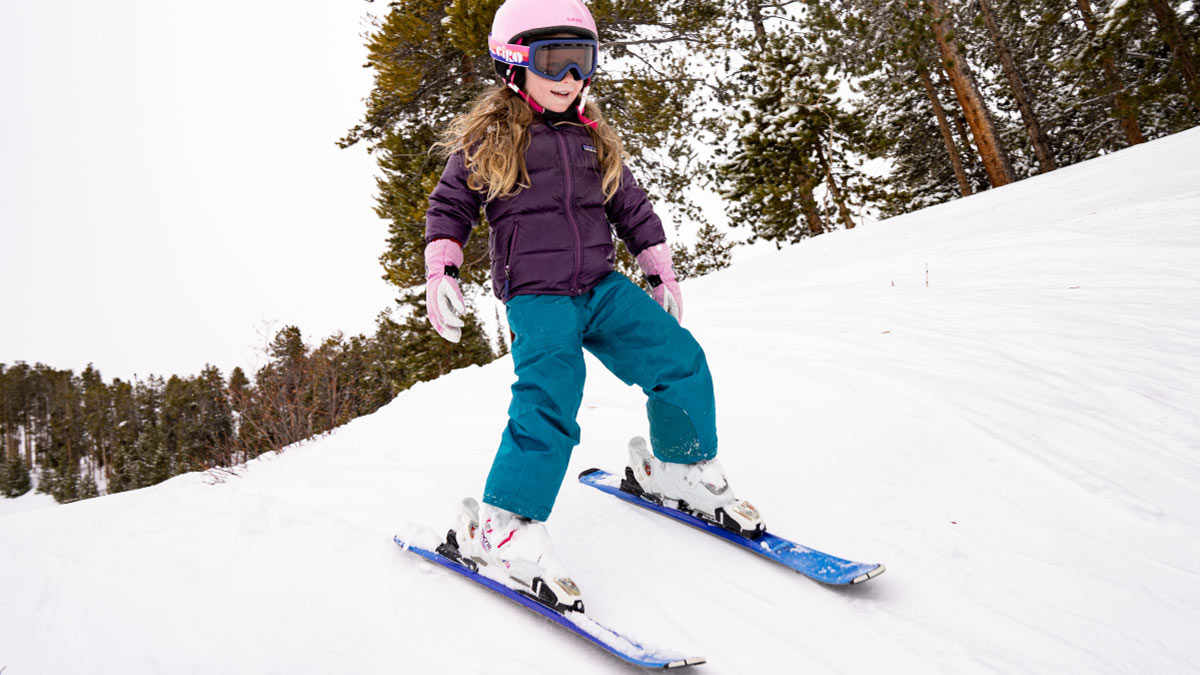 What are System Skis and Flat Skis?

System skis come with bindings, and they’re integrated into the ski. Rather than drilling holes into the ski to mount the bindings, they have a plate attached to the ski that the bindings attach too. Flat skis are sold as a ski only. Bindings are then mounted to the ski by first drilling holes into the top of the ski and then installing the heel and toe pieces. When picking bindings for a flat ski, the brake width of the binding should be equal to waist width or up to 15mm wider.

Most all-mountain skis are sold as a system ski while freeride and freestyle skis are often sold as flats.

Camber is the traditional shape for downhill skis. When laid on a flat surface the tip and tail of the ski make contact close to the ends and the ski curves upward. The ski essentially stores energy when it’s flexed by the skier's weight, providing for lively turns, or providing pop when you hit a jump or the top of the pipe.

Rocker, also called reverse-camber, is essentially the opposite of camber in that it curves upward. When laid on a flat surface, the ski’s tip and tail will kick up in comparison to the center of the ski. Where and how much that ski kicks up will vary depending on the ski’s design. Downhill skis with rocker offer better float through powder by lifting the nose. The rocker shape also makes it easier to turn wider skis.

As the name says, these skis are flat between the tip and tail. If you laid one down on a flat surface, it would sit flush. Truly flat downhill skis are not very common. More often you’ll find skis that are almost flat through the middle of the ski with rocker in the tip and possibly the tail.

This is where many skis today fall, with some combination of rocker and camber being common. Rocker in the tip of the downhill skis makes them easier to turn and offers float in powder or choppy snow, with camber underfoot to better hold an edge while turning. The blend of rocker and camber that a ski manufacturer chooses will match the style of skiing that the skis are designed for.

Ski boots might not be as flashy as skis, but they’re easily the most critical part of your overall setup. An important thing to keep in mind is that downhill ski boots aren’t like a pair of shoes you walk around in on a daily basis; they’re a piece of performance footwear. The main categories of Ski Boots are men's ski boots, women's ski boots and kids ski boots.

Ski boots come in what is called Mondopoint sizing. Unlike shoe sizes, which can vary a lot from one brand to another, the idea behind Mondopoint sizing is to have a consistent system. Mondopoint sizing is calculated by measuring the length of your foot, from heel to big toe, in centimeters. The easiest and most accurate way to do this is to place a piece of paper on the floor against a wall, stand on the paper with your heel against a wall, then make a mark on the paper where your big toe sits, do this for both feet. Once you have made a mark for both feet, measure from the edge of the paper to the line using a metric ruler. This measurement will be your mondopoint boot size. If one of your feet is slightly larger than the other (less than one centimeter), the smaller boot size is the best option.

Beginner and intermediate downhill skiers will generally prefer a boot that’s close to their Mondopoint size. Though the boot will likely feel snug at first, the liner will pack out after you ski in them a few times. More advanced skiers will often prefer a boot that’s ½ to 1 size smaller than their Mondopoint size. This snugger fit creates a more responsive and precise feel on the skis.

Also keep in mind that when you try a pair of boots on, they’ll feel snug when standing upright. When you flex your knees and get in a skiing position, this will drive your heel back into the boot and create more room for your toes.

Flex refers to how hard it is to flex the boot forward when you bend your knees and get into a proper skiing position. Downhill ski boots come in a wide variety of flex, indicated by a number that will usually range from 60 to 130. The higher the number, the stiffer the boot. Keep in mind, there is no standard for how this number is measured, so a 100 from one brand may feel different than a 100 from another brand, but it’s a good general guideline.

Beginner downhill skiers usually prefer a softer flex in their boot, while more advanced skiers prefer a stiffer flex. Those that spend most of their time in the park or pipe, or freeriders, also usually gravitate towards a softer boot, while those that ski fast on groomed runs tend towards stiffer boots. And finally, height and weight play a role as well. A shorter and lighter skier will have a hard time flexing a very stiff boot while a taller and heavier skier will often find a very soft boot too flexible. 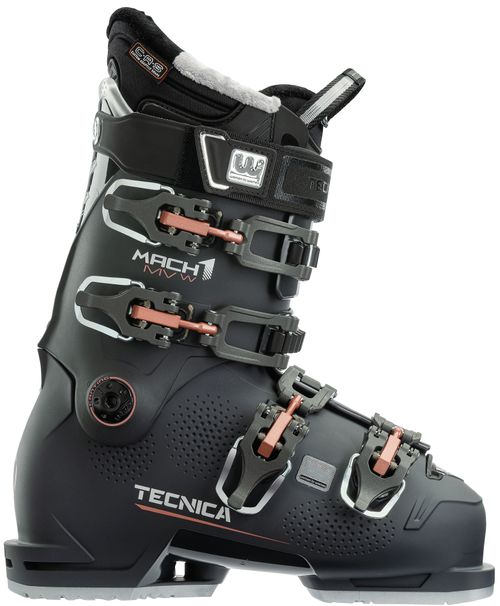 If you have flat downhill skis, as opposed to a system ski, you’re going to need to purchase bindings. The two key things you’ll need to know are the waist width of your skis and your DIN setting (this is the force required to release from the binding.)

The waist width of your skis is important because it determines how wide of brakes you need to have. The brakes need to be wide enough to clear your skis but not so wide that they drag when you turn. Some bindings offer removable brakes so you can swap to wider or narrower brakes if needed.

The DIN setting is an industry standard for the amount of force needed to release from your binding. Downhill skiing technicians calculate this based on your height, weight, riding style and ability level. A lower DIN means the bindings release easier while a higher DIN means more force is required. You want to make sure you’re selecting a binding that covers your desired DIN setting. An improper DIN setting can be dangerous and in some cases cause injury. When it is set too low, it can cause your binding to release your boot when it shouldn't, when it is set too high it may not release your boot during a fall. It is always best to have your DIN and sizing set by a professional. 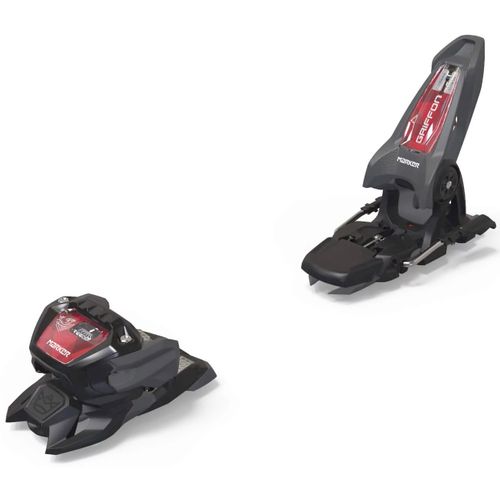 When it comes to selecting ski poles, the most important factor is getting one that’s the right length. The easiest way to size a pair of downhill ski poles is to flip it upside down so that the grip is touching the floor and then grab under the basket. You should find that your elbow is at or just slightly more than a 90º angle. If you find that your hand is higher than your elbow, you should size down a pole. If you’re going to be skiing primarily in the park and pipe, you should move down one or two sizes. Ski poles are also split into men's ski poles, women's ski poles and kids ski poles. 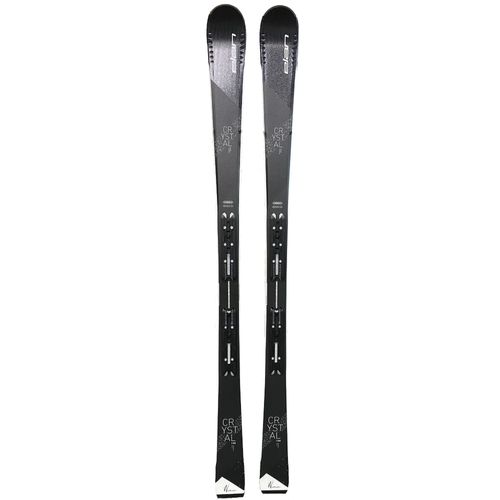 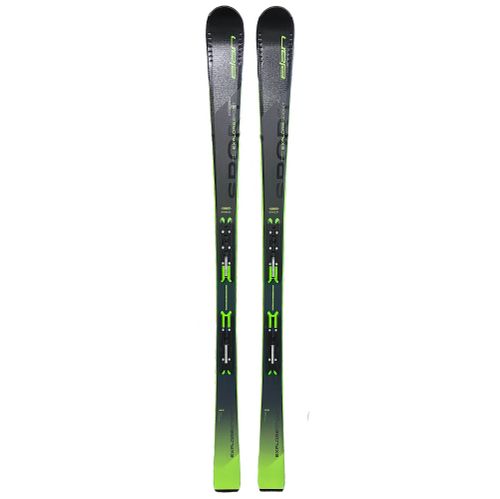